A Market in Defiance 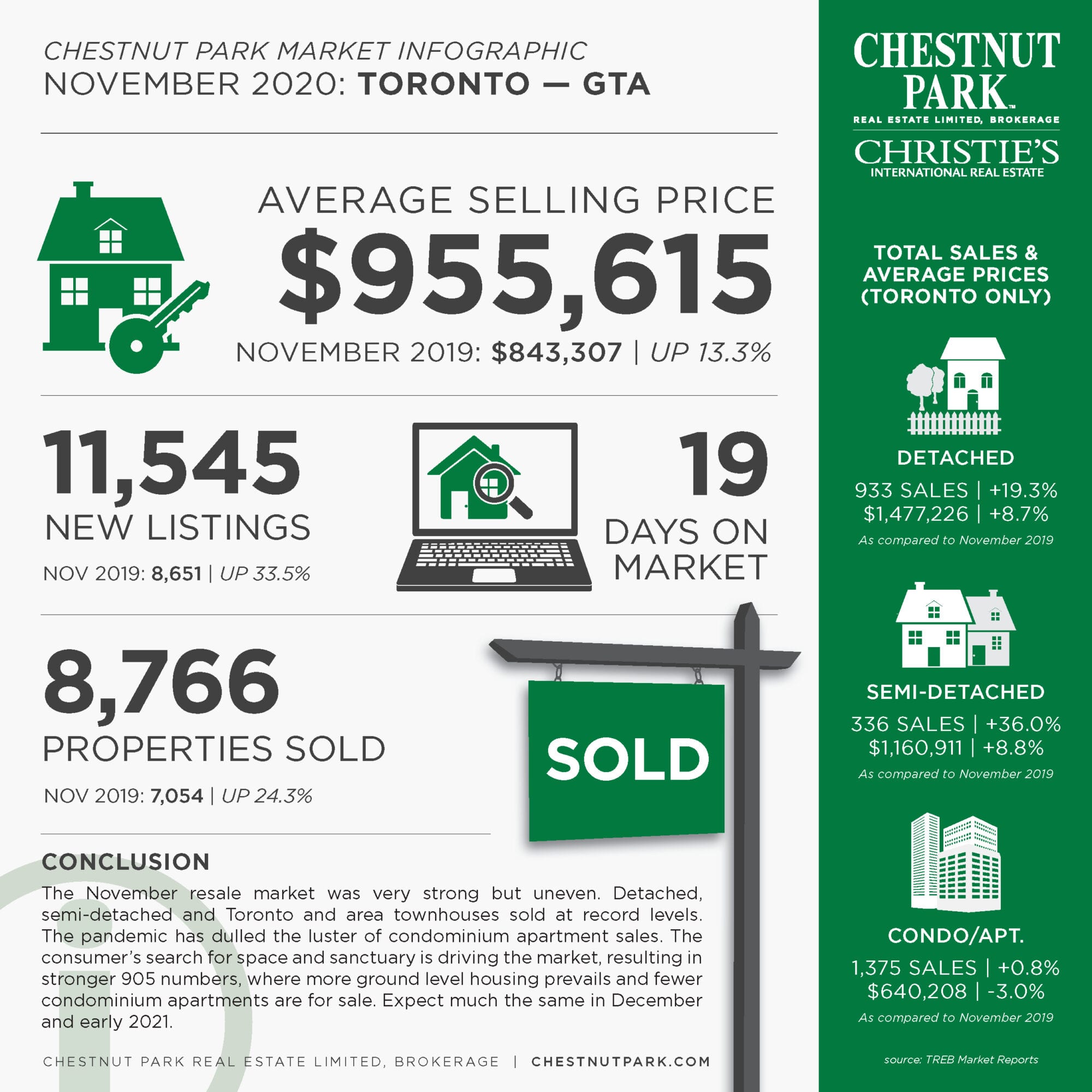 The market is reshuffling.  People are recalibrating where and how they want to live.  Some are acting on their savings to capture low interest rates.  Others are redefining their lives.

The report below is the analysis of  November’s market activity by Chestnut Park’s Managing Broker, Chris Kapches.

The Toronto and area residential resale market continued its torrid pace in November, defying all expectations and forecasts. It wasn’t, however, homogenous in its performance, with different housing types and areas performing at dramatically different levels.

Overall, reported sales for the greater Toronto area were up a scorching 24.3 percent compared to November 2019. Last year, 7,054 residential properties were reported sold. This year that number jumped to 8,761. That number was driven primarily by the sale of ground-level properties, detached, semi-detached, and townhouse homes. Sales of these types of homes increased in both the City of Toronto and the 905 region, and correspondingly, so did average sale prices.

In November, the average sale price for all properties sold across the greater Toronto area came in at $955,615. This number was more than 13 percent higher than the $843,307 achieved in November of 2019. In the City of Toronto, the average sale price was even higher, coming in at $979,224. These numbers would have been even higher if not for the lagging performance of condominium apartment sales in the City of Toronto.

It should be noted that the high end of the market also put on a strong performance. Throughout the greater Toronto area, 356 properties with an average sale price of $2 million or more were reported sold in November. This compares with only 199 sold in the same category last year. On a year-to-date basis, 3,363 $2 million plus properties have been reported sold. Last year, at the end of November, 2,171 properties at this price point were reported sold. This year’s sales represent a 55 percent increase in high-end property sales compared to 2019.

If there is a dark spot in the greater Toronto resale marketplace it’s condominium apartment sales in the City of Toronto. In November, sales were flat, and average sale prices fell off by 3 percent. Unfortunately, that’s not the whole story. Inventory levels are increasing dramatically. In November, 2,943 new condominium apartments came to market (some of these were no doubt new listings of units that hadn’t sold and were being re-introduced to the market, often at lower asking prices). Last year, only 1,629 new listings came to market. November’s new listings increased the total number of active listings to 5,018, 194 percent higher than the 1,707 condominium apartments available to buyers at the same time last year.

On a more positive note, by the end of November, year-to-date, 88,026 properties (all types) were reported sold for the greater Toronto area. Total sales for 2019 were only 87,753. Notwithstanding the pandemic, and its negative impact on our society, our businesses, and our health and safety, with December still to be counted, 2020 will be the Toronto and area’s best year for resale house sales since 2016. Astonishing.

Over the final weeks of December and into the new year the experts producing economic reports have been overwhelmingly grim.  On the topic of real estate, they did not take into account the great behind the scenes activity in the market. On the one hand, we should all be wringing our hands and drowning in tears, […]

Mystery Behind the Numbers

The statistics are not telling the whole story. There is a great deal of behind the scenes activity in the markets. Sellers want to sell. Buyers want to buy. Everyone is waiting for that froggy moment to spring at the fly. In constant refrain,  a key factor in keeping average sale prices in Toronto from […]

The Storms of November?

…and the Storms of November came early?  It depends what numbers you look at. The year over year average prices for October are down, but for the past few weeks the selling averages are cautiously inching up. Are we at the bottom or does this trench go deeper? The Bank of Canada is indicating a […]